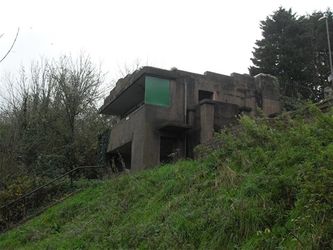 The first building encountered when entering the grounds from the main road, just to the right of the main gate, is the Battery Observation Post; the shell of this is still intact. This was the nerve centre for the Battery. It consisted of a twin storey building with a wide operational field of view, and contained all the equipment used to control the battery when in action or alert. The compliment of five, including the Battery Commander, operated the high precision range finders housed in the upper story and maintained communications with the gun and searchlight emplacements. A large and very accurate 'Barr & Stroud' range finder was housed in the lower part of the building. The post was in communication with the guns and searchlight emplacements by phone and loudspeaker; signal indicator lights could also be used to convey certain instructions.

The interior of the top level has been restored over the Winter of 2021/22 and is open to visitors on our Special Event Days. 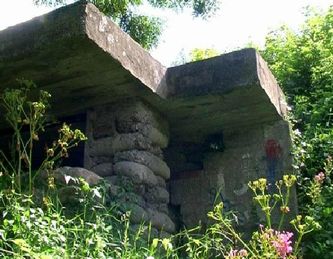 Just on the harbour-side of the B.O.P, at the top of the quarry, is a pillbox which is on record as being the Emergency B.O.P.Located within a 6 second dash of the main B.O.P, this would have probably been used as an emergency should the main B.O.P be taken out. This could also have been earmarked as an extra gun position. 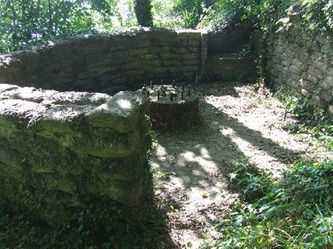 Located directly below the Emergency Battery Observation Post is a 37mm Anti Aircraft Gun emplacement. Although the position of the emplacement was known to veterans of the site and there was armament of some type there during the war years, the exact kind of weapon was not known. Recent investigations and references in the Public Records Office revealed that the weapon was a 37mm Anti Aircraft Gun. However, the type of gun was not stated, but according one expert it is likely to have been a One Pounder Pom Pom.This gun position was probably sited to serve two purposes. One as Anti-Aircraft defence and alternatively, being in an ideal position, a backup for the 6lb Hotchkiss Harbour Defence Gun, located further down the site. Although there was no coverage to the rear of the position against aircraft attack, it was sited admirably against low flying hit and run raiders which flew past its position attacking the shipping and harbour installations. The Bofors AA gun and Rocket Projector on site would be useless on these occasions as they would be firing down on their targets and possibly endangering ships and installations. These guns would engage targets flying higher altitudes. 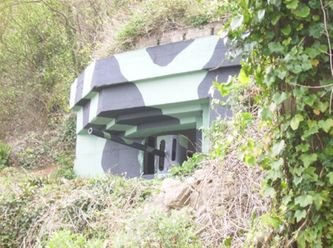 The Harbour Defence Gun as described in the Public Records was situated on the lower slopes of the site. In can be seen today from the bottom of the steps in Freshwater Quarry.The 6pdr Hotchkiss was first adopted by the Royal Navy and then taken into coast defence. They were very old guns, the first of which entered service in 1885. They were subjected of course to many modifications over the years and in fact were installed on tanks in the First World War.The role of the Harbour Defence Gun was to defend the harbour against enemy landing craft which may have penetrated the defence's within the blind areas of the main 4.7inch guns and gained access to Freshwater Quarry and the inner harbour installations. This would have laid the Battery open to attack from its lower reaches.

Proceeding along the path from No.2 Gun Floor and past No.1 Gun Floor is a cemented area with seats and a brick wall. The seats were put there by the Local Council for the benefit of the general public. The brick wall formed the rear part of the Cookhouse or Emergency Cookhouse as it is described in public records. This would probably have been used if there was an emergency and all the personnel were required to be in the near vicinity of their posts.The construction of the Cookhouse held several iron stoves and all the necessary equipment required to supply meals for the adjacent personnel. The roof was corrugated iron. The cement slab seen in front of the Cookhouse and to the seaward side of the path, was one of the areas where the Dummy Loader practice was carried out.

This underground bunker stored the shells and cartridges for the No.1 4.7inch Gun Floor. 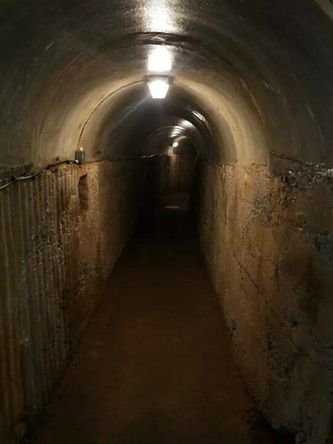 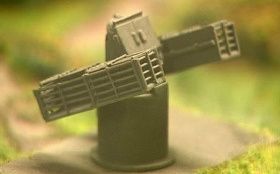 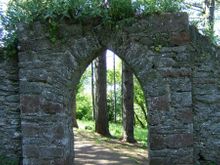 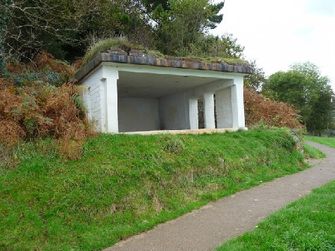 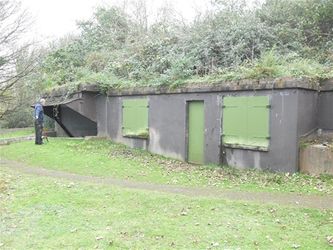 The War Shelter was the stand to area for the gun crews which were on duty and who were ready for action at any time. This area was situated between the two gun floors and were readily accessible by tunnels. The tunnel entrance from No.2 Gun Floor to the war shelter is seen on the right hand side of the Gun Floor. The entrance to the war shelter from No.1 Gun Floor can be seen (now bricked up) to the rear of the emplacement.The 14 man gun crews, plus perhaps a couple of ammunition carriers, were on duty al all times and at no time was there no one within or within close proximity of the War Shelter. Meals and entertainment were always taken in the area.  Interior of these buildings have been restored to how they were in the 1940's and are open to the public on our Special Event Days.

Located just down from the Altmark to the left of the main path. This is a grass covered concrete construction and it was the main magazine bunker for No.2 4.7inch Gun. Ammunition was carried from this to the gun floor. For the heavy shells it was probable that a small trolley was used. 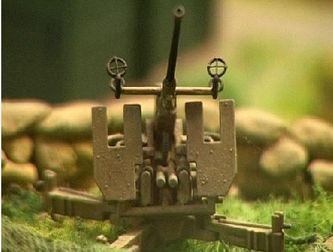 There were many varieties of this gun which was of Swedish design and origin and were popular with many countries. In many theatres of war they were used as Anti Tank weapons because of their low angle of depression. The maximum vertical range was approximately 5000 metres (16,500 feet).There were frequent practice sessions on the Bofors with an aircraft towing a drogue past the Battery site. On one occasion the pilot thought it necessary to inform the sergeant in charge of the gun, by radio, that he was towing the target, not pushing it. The Home Guard occasionally also took part in these practice shoots.

This construction, although it may seem insignificant to the passer by, is just as important as any other building on the complex. It was built before the war as a shelter for the locals to sit and enjoy the view. There were a few of these shelters around Brixham, all of the same design. It is located about 20 yards down from the main Battery Observation Post.During the war years when the Royal Artillery occupied the site it was boarded up and used as a guard house and a store for small arms and spare parts. It was named by one of the compliment of the Battery as the "Altmark" and it is thought that it was about the time that the British destroyer Cossack rescued 299 British merchant seamen from the German ship "Altmark" on February 16th 1940 in the Norwegian Jossing Fjiord. The Altmark was the supply ship to the Graff Spee. The name given to this construction as the "Altmark" is recognised today in the Public Records Office and our Local Council.

There were two of these buildings on site - the first one to be seen is located to the left of the archway which is reached by taking the left hand path at the bottom of the main path from the Battery Observation Post.

The other building can be seen to the right after passing through the archway.

There were two Lister Diesel Engines housed in each building, driving generators which produced electrical power for No.1 and No.2 Search Light Positions and also as an emergency supply for the Battery complex. Normal electricity supply came from the Brixham Electricity Company.

This can be found at the Southern most part of the Battery on entering the grounds at the top of Fishcombe Road. The reserve water supply tank cannot be mistaken as it takes the form of an oblong grassy mound just to the right hand side. The capacity of this tank is 25,000 gallons and in the past it has been used by the ICI Company in Freshwater Quarry and at present is used by the Zeneca Marine Biological Laboratory at the same location. During the war it was a stand by water supply which could be used also for fighting fires if necessary. 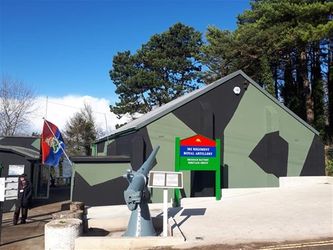 The ATS Building stands on the Southern part of the Battery complex, at the bottom of Fishcombe Road. It is located away from most of the other features of the site.The ATS Building is a single storey structure with an interior dimension of approximately 11 metres by 7.5 metres and was used as a training centre for all operations of the Battery needed in action. Inside, against one of the walls was erected a large table approximately 4 metres by 2 metres. Its base represented the water area of Torbay and the wall beyond was painted with scenery made to look like the view looking seaward from the Battery.This table was marked out in intervals to represent distances in yards from the Battery and small model ships could be moved along as targets at any given distance. There were also two miniature searchlights on the table edge which could be used to simulate night shoots. The base of the table consisted of pegboard through which thin dowels could be slid up to represent fall of shoot.

All personnel periodically were trained using this, from the Battery Commander to the Gun and Searchlight Crews and it was a very efficient way to practice all operations of the Battery as when in action. The room would usually be darkened and whoever was commanding the shoot would give an estimated range and deflection of the model target. A detailed person would push a dowel through the appropriate hole in the table to represent the fall of shoot at that range. Any correction could then be made.

No.1 and No.2 Search Lights 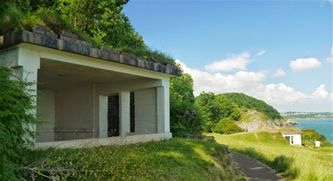 The Searchlights were located on the lowest part of the complex so as to command as wide a sweep of the bay as possible. The Searchlights were powered by the Generator Rooms and remotely controlled from the Battery Observation Post.These powerful lights capable of producing some 200 million candle power were approximately 3 feet (90cm) in diameter, using 3 parabolic mirrors.The light source was a pair of carbon rods positioned in front of the mirrors which were subjected to a high electrical current being passed through them. When the current was switched on, an arc was struck and the rods were slowly drawn apart to a set gap, which drew a brilliant electrical flame. As the carbon burnt away, the gap was adjusted manually to keep the gap set at the required distance sufficient to keep the light burning.The crew of these lights consisted of two lamp attendants. Their height above seal level was, No.1, 50 feet and No.2, 40 feet. The resulting intensely bright light reflected by the large mirrors was capable of illuminating targets up to 3000 yards in normal weather and up to 7000 yards in exceptionally good weather conditions. 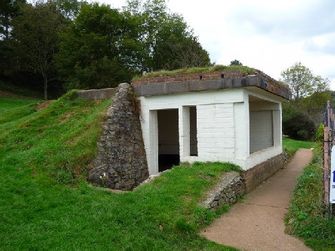